“Dividing an elephant in half does not produce two small elephants.”

If you are fortunate enough to enjoy a long and varied path of military service you will inevitably transition from tactical to operational to strategic planning, operations and thought. And as this journey of challenge and reward unfolds you will, with equal inevitability, come to know all too well the limits and bias of linear thought. The concepts of systems thinking and design are a great place to look for alternative solutions that you might otherwise never allow to emerge.

In 2012, as Wing Commander of the Royal Canadian Air Force’s (RCAF) tactical aviation element (1 Wing), my team and I became deeply engaged in what I now recognize as deliberate systems thinking and accidental design. Prompted by an aggressive reintroduction of medium-to-heavy-lift helicopters (MHLH) into the RCAF’s Tactical Aviation Enterprise (TAE) but within a resource constrained strategic environment, pressure was high to find personnel savings within existing force structure. Within this context, Senge’s (2006) The Fifth Discipline explanations of the interdependencies of “aspiration…, reflective conversation…, understanding complexity…,” as well as Kotter’s (1996) Leading Change, proved pivotal to our analysis and enterprise-wide engagement that progressed over more than a year. Most notably, it was systems thinking that exposed a solution space that was ultimately endorsed by the chain of command.

In short, analysis and successive reframing revealed an outdated but persistent Cold War force structure that had long been ignored by necessity but not yet formally challenged or changed in reality. As analysis progressed, not only were no personnel efficiencies to be found, it eventually became clear that the Wing had already begun an insidious transformation from independent squadrons orchestrated by a tactical level headquarters, to a remarkably interdependent Wing producing task tailored and on demand aviation detachment effects; all driven by a relentless drive to sustain operational outcomes as resources were squeezed over years. In effect, what started as a quest for efficiencies emerged as a comprehensive Wing restructure that not only integrated MHLH, it formalized and accelerated the nascent transformation. The resulting detailed five year plan is now complete and has set the stage for the next evolution of organizational innovation.

Throughout the process, systems thinking was persistently leveraged, especially each time the limits of linear thinking and analysis were encountered. Components of systems thinking theory were even reviewed up front to ensure a common baseline such as the differences between complicated and complex systems and how the former is almost always a default over the latter. In retrospect, it is now also clear that elements of ad hoc and uninformed design were also a hidden part of our process. I personally had no exposure to design theory until attending the Canadian Forces College – National Security Program in 2015-2016, well after 1 Wing’s restructure planning was complete and in execution. However, once introduced to design models and descriptions such as Banach & Ryan’s (2009) The Art of Design, it became clear to me that there is an inherent interplay and unavoidable relationship between systems thinking and design, a relationship I cannot yet fully dissect but suspect is related to elements of Senge’s “mental models” and “dialogue” disciplines. Nevertheless, looking back, our team absolutely leveraged some form of Banach & Ryan’s “problem situation…, framing…, reframing…, and reflective thinking…”  It is, therefore, encouraging to see that the introduction of design theory into the Canadian Armed Forces continues to expand and progress as our collective understanding matures.

I have long been a proponent of systems thinking in military planning and operations, despite my affinity for structured military planning processes that tend to encourage linear thought. Having now witnessed the practical payoff of leveraging systems thinking in a team of subject matter experts tasked with progressing the analysis of a complex military problem, my affinity has only grown. However, I now recognise that design theory also has a role to play that we must continue to pursue. As Zweibelson (US Army retired) described at a 2017 design and systems thinking symposium, design has the potential to be leveraged in “…creating what is needed but does not yet exist…so that the military organization gains relevance and advantage in the future system that is emerging.” This is exactly what my team was seized with delivering. Deliberate systems thinking and accidental design worked, but I would rather be deliberate on both counts. 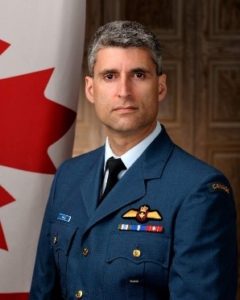 Member of the Week: Anne Reiffenstein

Design in Civvies: The Promise of Creating Degrees of Freedom in Government

The Archipelago of Design invites blog contributions about design thinking and innovation methodologies in defence organisations.